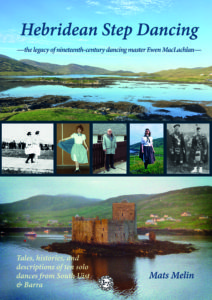 This book was launched in Daliburgh, South Uist, Scotland on the 11 June 2019 by Frank McConnell.

General release as pdf book at €12.50 through this download purchase link.

A limited number (20) spiral bound hard copies (at €20 plus shipping costs from Ireland. The weight of the first edition of the book is just over 500g so postage within EU is €11.00 and to the US/Canada €15.50) are available. Also 40 copies of perfect bound books, also priced at €20 plus cheaper postage are available. Please email info@lorg-press.com for spiral and perfect bound hard copy and postage details.

This book describes steps from nine Hebridean solo step dances, from the legacy of nineteenth-century dancing master, storyteller, and catechist Ewen MacLachlan who lived and worked in South Uist and Barra. A dance devised by Fearchar MacNeil is also included.

The legacy of Ewen MacLachlan’s dance repertoire remained with the people who kept dancing and passing them on. The steps remembered by the late Fearchar MacNeil of Barra, and John ‘Iain Ruadh’ MacLeod and Donald ‘Roidean’ MacDonald, both of South Uist, are presented in these pages.

Each of the nine dances are contextualised with notes on their style, associated music, and folklore: Scotch Blue Bonnets, Scotch Measure, Miss Forbes’ Farewell to Banff, Mac Iain Ghasda (Highland Laddie), Over the Waters, Tulloch Gorm, First of August, Flowers of Edinburgh, and, in addition, the solo jig Aberdonian Lassie, and Fearchar MacNeil’s dance Caisteal Chiosamul.

This book also traces how the dances were kept alive through local Island traditions, local teachings, and the ways observers of this tradition have notated and published their findings since the 1950s. The social and economic conditions of nineteenth-century South Uist and Barra are outlined to help contextualise the circumstances under which Ewen MacLachlan operated. A biography detailing what we know about Ewen attempts to sort the few facts we have from the many myths persisting about him. Further biographies of some Islanders who recalled these dances in the 1950s and newspaper entries from the Uist and Barra Games in the 1920s are also featured.

An independent project presenting videos of these dances ties in with this publication. Links to these videos are provided within this book and here: Online video content is produced by Canadian dancer Sabra MacGillivray.

It is my sincere hope that this book helps keep these dances alive for future generations to enjoy. 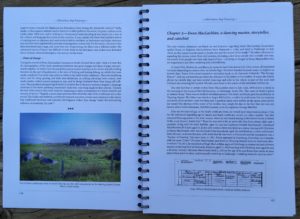